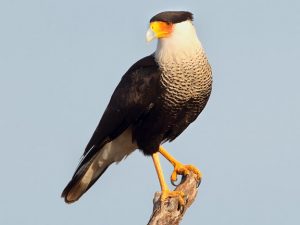 Genomic sequencing has advanced and stream-lined the development of microsatellite marker development. Microsatellites are a robust tool in the survey of population genetics and remain widely used despite the advancement of methods surveying SNPs. In collaboration with Joan Morrison of Trinity College and James Dwyer of EDM International, I developed microsatellite markers to be used in the study of the threatened crested caracara.

The caracara population in Florida is threatened by habitat loss and no previous genetic study had been conducted on the species. To facilitate the measurement of genetic diversity in the Florida population and investigation of wider population structure in North and South America, I developed M13-tagged primers for the amplification of 30 microsatellite loci. I performed genomic sequencing on the 454 platform and extracted microsatellite sequence information. I further refined my microsatellite locus selection in silico and designed primers for their amplification. I then tested the chosen loci for polymorphism in a set of Florida caracara samples. 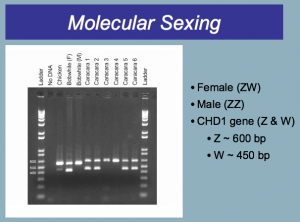 In further collaboration with Joan Morrison, I have applied molecular sexing techniques to confirm the sex of numerous crested caracara individuals.

Read about my results in our 2015 publication in Conservation Genetics Resources.

Development and characterization of polymorphic microsatellite markers for the crested caracara, Caracara cheriway