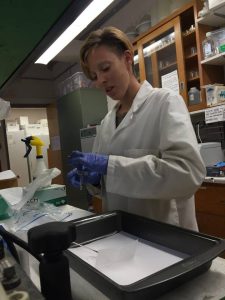 Investigation of population structure of extirpated populations can be accomplished through the inclusion of museum samples in genetic analyses. Pronghorn are on the decline in the United States and have been extirpated in regions such as southern California. Efforts are underway to rehabilitate the endangered Sonoran and Peninsular pronghorn subspecies. Ecologists  generally agree that the subspecies boundary lies somewhere between northern Baja California, Mexico and western Arizona, USA. As captive breeding programs for both subspecies gear up for future release efforts, it is essential that they have the most accurate historical range data possible.

To help clarify the location of the subspecies boundary, I performed mitochondrial genome sequencing and microsatellite genotyping on pronghorn museum samples collected in California, USA and Baja California, Mexico.

Read about my work in our 2020 Journal of Wildlife Management publication:

Use of Museum Specimens to Refine Historical Pronghorn Subspecies Boundaries